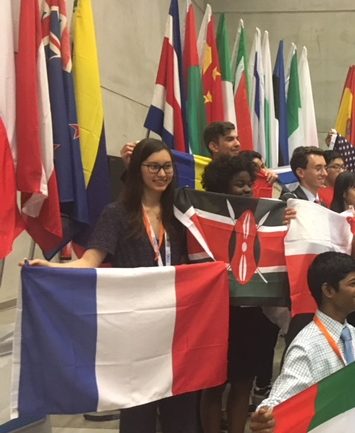 FRANCE COMPETES IN THE INTERNATIONAL BRAIN BEE FOR THE FIRST TIME

Lilia Evgeniou, eleventh-grader (première) from Ecole Jeannine Manuel in Paris and winner of the 2018 Paris Brain Bee, became the first student to represent France at the International Brain Bee Championship, which was held in Berlin during  the Federation of European Neuroscience Societies (FENS Conference). The event attracted 13-18 years old student finalists from 25 countries.

Students were tested on their knowledge of the human brain including such topics as intelligence, emotions, memory, sleep, vision, hearing, sensation, Alzheimer’s disease, Parkinson’s disease, schizophrenia, addictions and brain research. The competition involved oral tests, a neuroanatomy laboratory exam with real human brains, a neurohistology test, and a patient diagnosis component. At a typical IBB,  sample questions include: What kind of molecules are semaphorin, ephrin, neuropilin and plexin? Sonic hedgehog is important for the development of what part of the nervous system? What is the medical term for when you start dreaming before you fall asleep? Stargazer mice are experimental models for which type of epilepsy?